PUNCHING ABOVE OUR WEIGHT

The big statement back in the 1980's was always that we (Australia) were "punching above our weight". It was true then and is probably still true now.

The only difference is that the past thirty years have seen us relegated down a couple of divisions.

Back then we were a medium/heavyweight. Today we're very much one in one of the lighter competitions.

That's fine. The point is to recognise it, as our ASEAN friends do. So when China occupies and creates islands in the South China Sea, we may be very unhappy about it; we may choose to protest verbally; but sending airplanes and ships? Really?

What's the point, as I asked in this piece in today's Canberra Times . . .

HAS MALCOLM LOST THE PLOT?

Despite some of the headlines about "Chaos in the Government" and the latest Morgan Poll (Morgan - does this normally wildly inaccurate poll still have credibility for precision?) marking the government down by less than the polls margin of error, I reckon Turnbull's just not operating the way we in the media are used to.

My wife, Cath McGrath, had a go at this in a column for SBS yesterday . . .

My own take is slightly different . . . 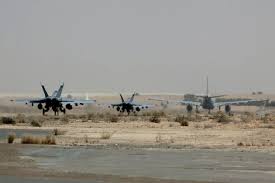 RAAF KC30 and Super Hornets taking off from Al Minbad, 2014

Aaah, I've been away.

But now I've finally come to realise I'm not posting for you, but for myself . . . to keep my own thoughts in order.

So I better make doing this a part of my normal day's activity again. It just requires a bit of discipline.

THE FUTURE OF WORK

This piece begins anchored in the current domestic debate about the Budget, but that's not what it's about. The new wave of computerisation of work will change everything,

As I wrote in the Canberra Times, not even journos are safe . . .

ANOTHER TAKE ON THE BRITISH ELECTION

When one is never enough.

This column, written first, appeared today in the Canberra Times . . .

There's an inevitable tendency to regard elections as immutable; a "decision of the people's will"; something that will "change everything".

Outside No 10 for another 5 years
Courtesy The Telegraph

This piece for the Strategist considered the two significant ways in which the UK has changed . . .

Email ThisBlogThis!Share to TwitterShare to FacebookShare to Pinterest
Labels: Strategist

I'd been tempted to headline this yarn as "split over ISIL", or "Andrews and Abbott disagree about why we're in Iraq".

Unfortunately, although possibly justified neither of these assertions are quite true.

When we went into Iraq Tony Abbott insisted Daesh was a "death cult".

The key point is that Andrews specifically rejected this as a reason to deploy forces.

He drew a more logical picture of why we're involved, by distinguishing between nation-states (which, implicitly, one can deal with) and other forces (operating outside the Westphalian system), as this column for the Canberra Times details . . .